Subject:  Europe – Should we Stay or Should We Go?

On 4 May 2016, a packed house took part in the first ACI UK Square Mile Debate of the year on the topical and contentious subject of Brexit.  Hosted at Portcullis House, the House of Commons annexe in Westminster, the Debate brought together political and financial industry commentators to speak for and against the UK leaving the European Union.  (see photos) 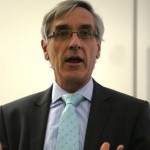 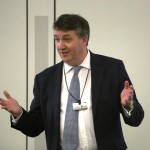 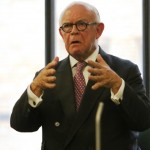 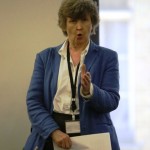 In a show of hands of ACI members and guests at the start of the Debate, the vote was narrowly in favour of remaining in the Union, mirroring the ‘live’ poll on the ACI UK website.   On 4 May, this indicated that on a personal level, 50% of those polled want to stay in the EU, 45% want to leave and 5% are undecided.   In respect of whether staying or leaving would be better for the City and financial markets sector, the poll showed 53% wanted to stay and 43% wanted to leave.   NB The online poll will remain live until June 23rd.

Each panellist gave a short and impassioned speech in support of the Remain and Exit camps before answering questions from a packed house of ACI members and guests.  The Remain and Exit camps presented emphatic arguments about the potential benefit/impact of a Brexit on the economy, trade agreements, migration and regulation and, mirroring the broader public debate,  made compelling arguments for both positions.

The Rt Hon John Redwood MP led the debate by saying “it is time to take back control….the UK will be more prosperous, more influential, more independent and better able to negotiate trade agreements (out of the Union)”.   He talked of the need to capitalise on the digital age and new technologies to secure our rightful place in the global market place, observing that “presidents-elect Trump and Clinton will both want better trade agreements  with Great Britain – the 5th largest global economy and 3rd largest military force [regardless of recent statements by Obama]”.   He dismissed as ‘absurd’ and ‘complete scaremongering’ the notion that UK would find itself subject to new and harsh trade barriers with other European countries (or anyone else), noting that the German government, for example, would have no desire to impose greater trade barriers on a country that buys far more from it than it sells to them. 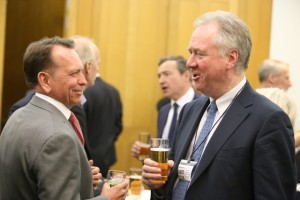 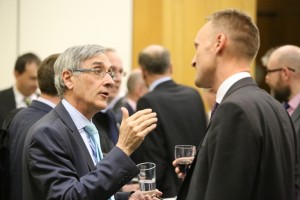 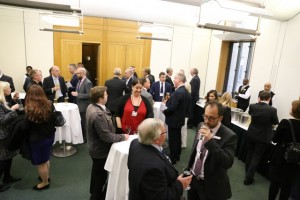 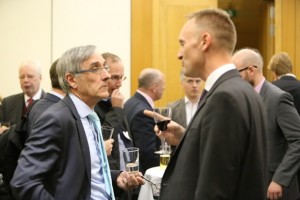 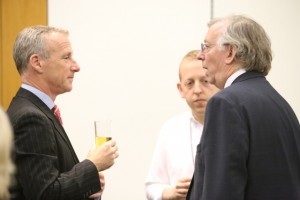 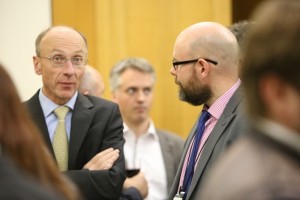 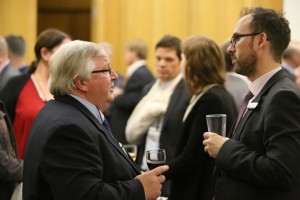 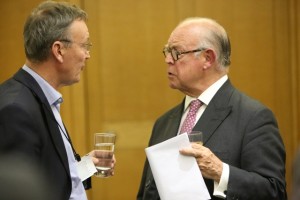 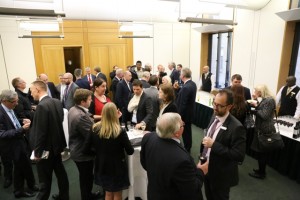 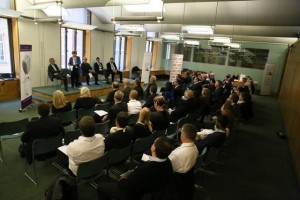 He referenced UK’s ability to reclaim control over taxation like VAT and Corporation Tax, citing £7 billion in revenues that had to be rebated by EU ruling with another £7bn earmarked to cover outstanding cases.   He noted the ‘£10 billion lost on the turn’ [between what we pay to the EU and rebates received], commenting that this sum could be put to good use on proper social care, removing social services cuts and investing in doctors and nurses (e.g. abolishing Student Nurse Loan repayments).   Leaving the EU would, he suggested, result in an economic boost from increased domestic spend, a significant correction to the UK’s balance of payments and a boost to GDP from taking control of taxation.

Tim Skeet followed, opening with the comment that he “didn’t recognise the Europe being described” and suggested that much of the anti-Europe rhetoric was reminiscent of 1988 (“Up Yours Delors”).  He disagreed with the proposition that the UK suffered from a lack of sovereign independence and influence within the European Union, asserting that “Great Britain is incredibly clever at fixing rules to suit its own purposes” [‘MiFID was written by the FCA’] and further, that “we win most of what we want out of Europe”.  He stated that GB in fact had significant influence over EU decisions, describing us as “the great nation setting the agenda” in respect of broadening the EU footprint in Northern and Eastern Europe.

Responding to the £10 billion that might be gained from exiting the EU, he commented that this would not be a gain but the price of exit since, like Switzerland and Norway, as a non-EU country, we would have to pay for ‘access’.  In essence, Tim observed that it is exactly the wrong time to exit (“IMF, Obama, at least 5 fiscal studies all think it’s a bad idea”) and that we have a better opportunity and future influencing activity from the inside.

Ruth Lea emphasised EU primacy (“it’s not shared sovereignty – it’s a quasi-federal, supranational body that overrides domestic sovereignty and law”), citing the European Court of Justice as the UK’s Supreme Court to illustrate the point.  At the same time, she observed that the UK is already harmonised with Europe in many respects (e.g. European passport) and could see no reason not to remain so post-exit, thereby eliminating the largest obstacle to a free trade agreement post Brexit between the UK and the EU.

Picking up on the trade angle, she observed that the “EU has 35 free trade agreements of which 32 don’t contribute a cent to the EU budget –but  Switzerland and Norway do”.  Further, she also doesn’t believe that any European country will raise trade barriers since it will be an exercise in ‘cutting off noses to spite faces’.   Moreover,  leaving the EU would open up a world of potential [to negotiate trade agreements] that are not available within it – Iceland, for example, has a trade agreement with China but not Europe and the UK has many other opportunities outside Europe (for example in the US and Asia) to negotiate favourable trade partnerships directly.

Responding to the question of where we would be in 5 years if we left the EU,  she posed her own question in response, what will life inside the EU be like in 5 years time?  Her view being that change is inevitable regardless of the result of the referendum.  For example, would a EU of 5 years time have a united armed force as is currently being proposed? She asked whether and how the EU proposed to resolve the migration issue and the Eurozone crisis (‘Mervyn King said many years ago that it’s doomed’) and how UK would really be able to influence any decisions in respect of these issues when it is ‘more and more on the periphery’.   In summation she posited that “life is uncertain – nobody knows exactly what will happen either way but it’s a terrific opportunity to change”.  Overall, Ruth emphasised that she saw no reason for an exit to be hostile and that we would want to remain in a friendly and cooperative relationship with the EU – as partners, free to decide what policies and rules to support and adopt.

Brendan Bradley, speaking personally, cited his 17-year old daughter as a representative of the pro-European younger community that couldn’t understand why ‘leaving’ was even subject to discussion.  He felt that much of the general debate relied on “obfuscation – using emotions not facts” and that we were ‘fooling ourselves’ that others would want to do business with England in ‘splendid isolation’.  (“Apart from financial services, there is little for us to export, giving other centres the opportunity to steal our crown”).

Addressing the trade issue, he noted that we import more from the EU than anywhere else and that post-exit, this would inevitably become more expensive, leaving the Government with only two choices to mitigate inflation pressures – fiscal and monetary.  On the basis that ‘nobody wants to pay more taxes’ and there is no desire to raise interest rates, the cost of exit would have to be borne by a decrease in Government spending; a complete counterpoint to the Outs assertion that we would have significant revenue savings from EU contributions to invest in public services.  (“The principle that we will benefit from a windfall is misguided”).

In respect of financial markets and services, he observed that ‘the market has already spoken’ in respect of weakening sterling and that his expectation is that it will further weaken with an exit.    In summary, he concluded that it’s better to be in ‘we can be aligned but wrong, but not misaligned and out’ and that in reality ‘we won’t all stay good pals if we exit’.

Opening up the debate to questions from the audience, the first suggested that the Brexit situation was ‘like 1999 all over again’ and that based on that experience (where interest rates went up but only temporarily), there was a good chance that after an initial flurry, the economy would recover quickly post-exit.    Another audience member reinforced this point, noting that ‘We were dominant [in financial services] before EU, and have remained so while part of it, so what will change if we exit?

The panel had opposing views on whether ‘we should be blaming the EU or replicating its success for example in Germany’ – the Exiters suggesting that the UK’s standing was perfectly compatible with the rest of the world and balanced everywhere except in the EU, where France and Germany in particularly benefited from an undervalued exchange rate (‘an asymmetric relationship’).   The Remain camp noted that Germany is an export powerhouse while GB is a service powerhouse and that the ‘chances are we are blaming the EU for things that are our own doing’.

On the question of freedom of movement and employment, a member of the audience was concerned that any restriction on freedom of movement to the UK post exit would make it much harder to employ ‘talent’ from Europe in financial services and other industries.  The Exiters on the panel believe that a non-discriminatory points system (like Australia) was fairer to everyone seeking to work in the UK, whether from Europe or any other continent, provided that their knowledge and skills were required.  The Remain camp shared the questioner’s concern, noting that the UK and London in particular was considered a magnet for talent for 500 million European s and to maintain London’s ‘vibrancy’ it would be essential to maintain open borders for Europeans.

After much very lively and sometimes heated debate, the discussion was concluded with a fibal show of hands which, while suggesting a small shift towards the Remain camp, was nonetheless a very close call.

ACI UK would like to thank the offices of the Rt Hon John Redwood MP and Variety – the Children’s Charity for sourcing the venue, and Mr Redwood, David Buik, Ruth Lea, Brendan Bradley and Tim Skeet for their participation in this event.   The next Square Mile Debate is expected to be in September 2016 on the subject of Compliance, Conduct and the new Global Code.

Organised around the core pillars of Represent, Inform, Educate and Charity, ACI UK represents and supports the interest of financial market participants in trading, broking, operations, regulatory and compliance functions.